I’d like to share some welcome changes that we’ve recently made to https://bugs.kde.org, KDE’s venerable bug tracker. Improving our bug submission process was one of the ideas I submitted to KDE’s 2017 goal setting initiative, and while it wasn’t formally chosen the way the Usability & Productivity goal was, people seemed to think that it was worthwhile to do anyway. The overall task tracking this effort is https://phabricator.kde.org/T6832.

First of all, we changed the names of some statuses:

We also added a template to the text field you get when you file a new bug: 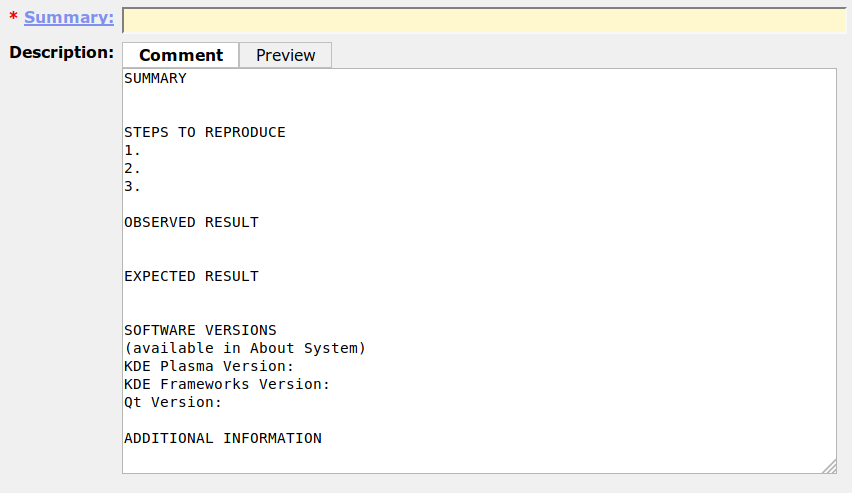 This should guide people down the path of filing better, more actionable bugs.

Speaking of filing better, more actionable bugs, we also changed the Bug Reporting Instructions link on the top of the page to point to https://community.kde.org/Get_Involved/Bug_Reporting.

Finally, we re-worked the attachment UI to no longer recommend attaching patches to bug reports (because they tend to get missed). Instead, it directs people to submit their patch using Phabricator:.

Hopefully these little improvements will lead to better bugs, fewer hurt feelings, and more patches. We’re already seeing a very good response from the new template in particular, and I’ve noticed that new bugs are being written following the template with Steps To Reproduce and version numbers. Awesome! This makes it easier for bug triagers and increases the likelihood that bugs will actually get fixed.

I’d like to offer a big shout-out to Andrew Crouthamel, who made all of this happen. Great job, Andrew!

Follow Adventures in Linux and KDE on WordPress.com
Join 754 other subscribers